“There is Nothing Sadder in the World Than Wasting Talent” 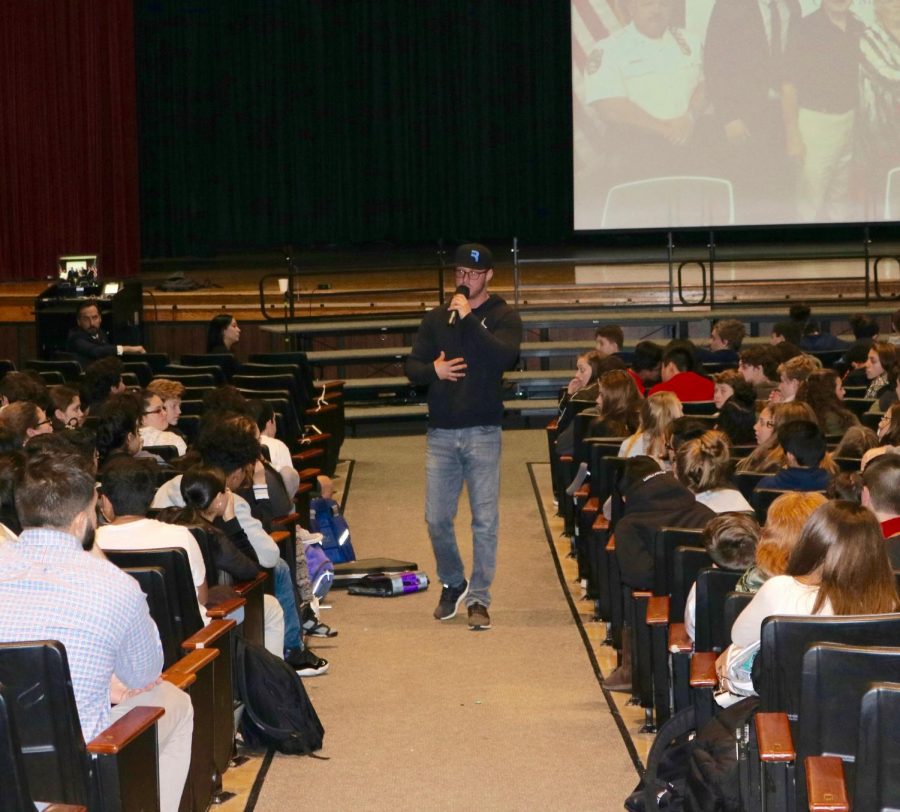 Kevin Alter spoke about addiction at an assembly for 9th and 10th graders this past Wednesday.

We all hear about drugs, we know drugs are everywhere, and all know about addiction at least a little. Kevin Alter, may know too much about addiction because of his personal experience. Mr. Alter came to our school on December 12th to explain to what drugs can truly do to someone’s life. Day by day people in the United States die more and more because of addiction and overdoses. This all must start from somewhere and it’s pretty simple when you think about it, “just trying it”. Like Kevin explained, people think it’ll only be a one-time thing and they’ll be okay after it. This is the root of the problem, so it is better to stay away to minimize the chance of something happening. There is a higher risk of drug addiction nowadays because drugs have become more accessible and sadly this raises the chance of drug addiction becoming a possibility for you or someone else falling into this, so just stay away.

“If I could change one thing about my life, it is trying marijuana for the first time.”- Kevin Alter. This is coming from a former addict who knew exactly where he went wrong and it was the act of “just trying it”. For Kevin, addiction wasn’t what was in his plans but it was what happened because of one life changing day. Kevin was a normal insecure high schooler and he didn’t know why people would leave during lunch and come back with red eyes. He asked his friend Louie who explained to him that kids would leave and smoke weed then come back to school. The next day Kevin decided to do the same thing and smoke marijuana during his lunch period off school property. Basically, Kevin had smoked once, became stoned and three days later was flipping marijuana himself, from not knowing about the drug to selling in a matter of days. Later, cocaine would be introduced and of course he would be hooked. Heroin, which is one of the worst drugs in the world, soon followed.  This will kill even the strongest of people. Yes, Kevin would graduate but he explained that he missed all the dances and high school events and that he didn’t remember a lot, he remembers his first heroin shot and his life just kept going downhill.

At 18 his parents would kick him out of the house for becoming a drug addict and they were sick and tired of the animal Kevin had become. Later on, Kevin would find himself homeless in New York City with the wrong people —  drug dealers, addicts, and gang members. At 21 years old Kevin would find himself in jail for the first time with some of the worst criminals in New York, from burglars, to murderers; it was horrible. Years would pass and Kevin would keep up the same habit of doing drugs. Eventually all he did was steal to sell the stolen items for drugs and his life was a living hell. Yes, Kevin would try to change his life around but he always felt that he needed to use drugs to be comfortable with himself.

One day he found himself sleeping in a stairwell with a Latin King gang member who was also an addict and Kevin was there for over 20 days just wanting to die. Kevin had enough at this point, he had overdosed seven times and should’ve been dead. Even Kevin said it, “I should have died.” His friend Louie called him up and told him to listen and go to a treatment center and listen to everything they said, and it’ll save him. “Louie pointed me in the right direction.” Kevin would regularly attend meetings about addiction and try to fight addiction. He found out that he had the lowest self-esteem in the world but with a lot of heart and fight Kevin would eventually find a way out. Now Kevin owns three businesses and will soon open up his fourth. This is a true story of a former addict who really went through the worst. Use Kevin as an example of what you don’t want to become, don’t waste that potential you have when you “just try it”.

Everyone has a gift, some are exceptional students, athletes, musicians, or anything else, the point is: everyone has a gift in their own way. “There’s nothing sadder in this world than wasting talent”- Kevin Alter. This is the overall message of the presentation, talent is a gift that shouldn’t be wasted by wrong decisions and everyone in this world is given the opportunity to do something special. Kevin stressed this a lot, he became a speaker for the ones that need the help and motivation to get out of this life of addiction. Kevin’s message here is to use the talent that is given to you, even though you might not know the talent at the moment don’t ruin it by “trying it once  — wasting your life”- Kevin Alter.

This presentation was very serious with a powerful message and the audience loved it. Everyone in the audience was quite engaged and no one was disrespectful towards Kevin because he was able to make everyone become interested in the crazy life story of an addict. I personally loved the presentation and thought it was amazing; the story showed the ugly side of the world with a great way out. Kevin Alter made everyone not want to miss one detail of the story. “Kevin Alter made it real today, and I’m so thankful” proclaimed Dr. Michael J. Hynes. Our School Superintendent loved it; he knew exactly why Kevin talks about this horrible thing that can happen to anyone. This is why he is thankful for someone like Kevin who truly helps out people with serious problems. “It was amazing”. These are the words that I heard come out of someone’s mouth after the presentation was over. It is true, the story was truly amazing.

Kevin Alter in a short time showed us the life of an addict, a tough vicious lifestyle with a great turnaround. His words were very powerful and hopefully people listened to him and understood his message. His advice can impact people in many ways, get someone to help another, get out of addiction, or prevent an addiction in the future. There were many things he said hopefully really help out someone that might be going don the same road. Thank you, Kevin, great presentation, powerful, inspirational, thank you. People will remember your story for a while and it was amazing to hear what came after the horrible life of addiction.