Murder Mystery Gets a Comical Twist on HULU

Only Murders in the Building is a fun, modern whodunit murder mystery that's perfect for family tv or movie nights. 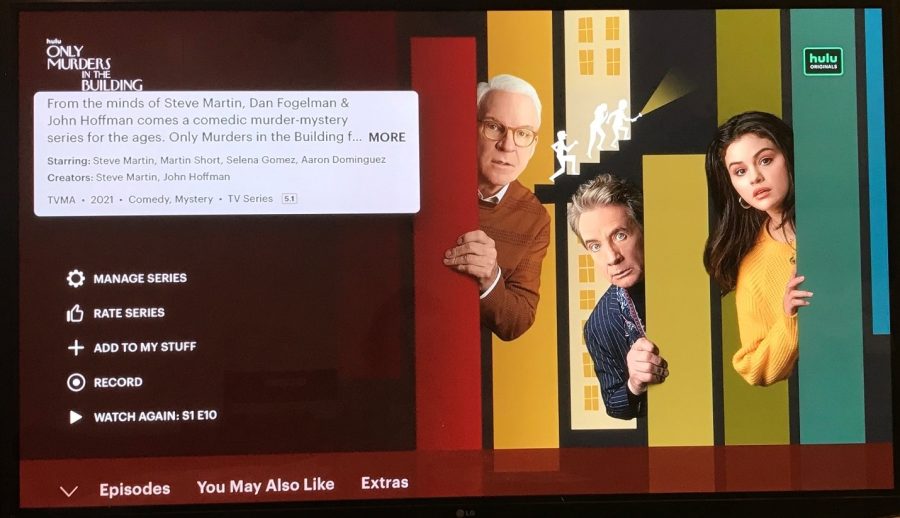 If you have a subscription to HULU, watch Only Murders in the Building to satisfy your murder mystery tv binge impulses.

If you are searching for a cozy murder mystery this winter, the new series, Only Murders in the Building, may be the perfect show for you. The Hulu original series created and starred in by Steve Martin successfully blends humor and a gripping plot to create a unique whodunit with an additional focus on adversity and friendship.

In the show, New York City locals Mabel, Selena Gomez, Oliver, Martin Short, and Charles, Steve Martin, work together to solve the murder of a resident in their apartment building, the Arconia, after police briskly rule the death a suicide. Although the group are opposites (Mabel, being mysterious and young, Oliver, being older and optimistic, and Charles, being anti-social and pessimistic) they are brought together by their love of True Crime podcasts. As they pursue multiple leads and create a podcast of their own, they uncover secrets about the other residents of the Arconia, learn of each other’s unfortunate pasts, and become close friends. However, the show still manages to remain comical through lighthearted teasing between the characters and humorous remarks and reactions, especially those made by Martin Short.

In addition to the amazing storyline, the costume design and set lends itself to the show’s warm and whimsical ambiance. Only Murders in the Building takes place in the Belnord, an Upper West Side apartment complex built in 1908 with vintage architecture and design. Each apartment that the characters live in also represent their personalities and vary greatly in size, color, and décor. Imaginative characteristics are also added to the show via its background music and unusual aspects to represent the characters’ emotions such as a bouncing floor and pestering Looney Toons characters that follow Charles. Additionally, the costumes each of the actors wear also help symbolize their personalities and feel complete. For example, Charles wears formal clothing, Mabel wears chic outfits, and Oliver wears colorful coats.

The wide acclaim the series has received is also shown by the numerous appearances made by incredibly famous people. Some of these celebrities include the comedian, Tina Fey, the musician, Sting, and the late-night show host, Jimmy Fallon. Patchogue is even mentioned as the characters visit Long Island!

Overall, Only Murders in the Building meets the requirements of a great murder mystery and comedy, and I suggest that anyone who has Hulu watches it!