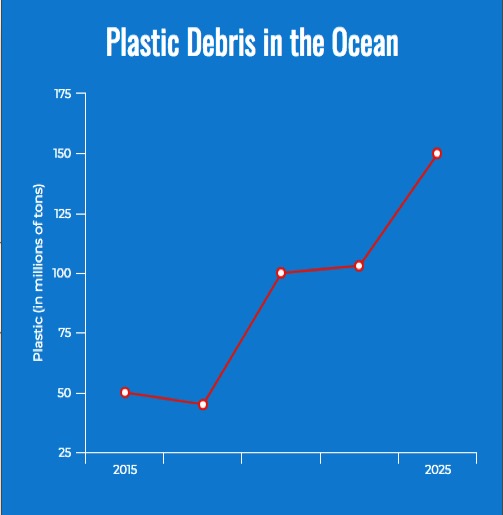 This graph demonstrates the dramatic increase in plastics in the oceans. In just 10 years, this number is projected to shoot up to 150 million tons.

A Glimpse Into a Polluted Future

Studies are showing that recent collections of numbers regarding plastic pollution, can result in major effect on the ocean in as little as 30 years.

Imagine walking in your neighborhood finding plastic bags, bottles, and bottle caps trailing down your street. Not that hard to imagine, is it? Considering that Americans used about 50 billion plastic water bottles in just last year, it’s almost the usual that you find a plastic bottle on the street.

A small piece of plastic on the ground, so what? Well, it may seem un-alarming, but this waste that is found around land is easily blown over time into the oceans and beaches. This has lasting effects on the ocean and marine life.

According to www.seeturtles.org “Hundreds of thousands of sea turtles, whales, and other marine mammals, and more than 1 million seabirds die each year from ocean pollution and ingestion or entanglement in marine debris.”

Not only does plastic affect marine life, it can affect humans, too. Fish eat plastic, humans eat fish. So, the chemicals from the plastic, even if the plastic is removed, go into the fish humans eat and cause bacterial infections, such as E Coli.

As noted on the website, www.businessinsider.org  “By 2050, the oceans could have more plastic than fish.” 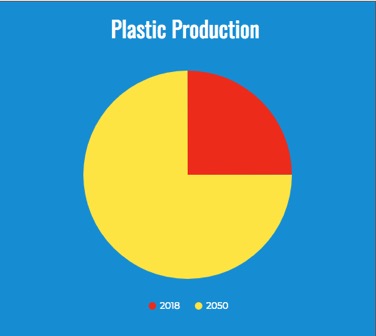 Photo by Gianna Gordon
This graph shows the ratio of plastic waste growing by 2050.

In roughly 30 years, pollution will have ultimately taken over the ocean. Turtles eat jellyfish and they can easily mistake a plastic bag for one. It could choke them or be unable to pass through their system and they could lose their life. Remember that grocery bag that you saw blowing down the street? Well, it can cost you, potentially, a life of a marine animal.

In just six years from now, plastics found in the ocean are projected to go up by 100 million tons. Think about the effects all of that will have on animals living in the sea, or, by that time, what’s left of them.

“Industry experts expect that by 2050 we will be producing three times as much plastic as we do today” says www.future agenda.org

In 25 years people will have to throw on a hazmat suit to go surfing in order to protect themselves from all the ocean pollution and contaminated water.”

As shown by other predictions, producing leads to polluting. The more pollution there is makes it harder for animals living in the ocean to differentiate between what’s food and what’s not food.

Why Knot Sailing says “In 25 years people will have to throw on a hazmat suit to go surfing in order to protect themselves from all the ocean pollution and contaminated water.”

This is eye-opening because it could be prevented or reduced. Use reusable bags or bottles, participate in a beach clean up, go the extra mile to save the oceans from the infestations of plastic.