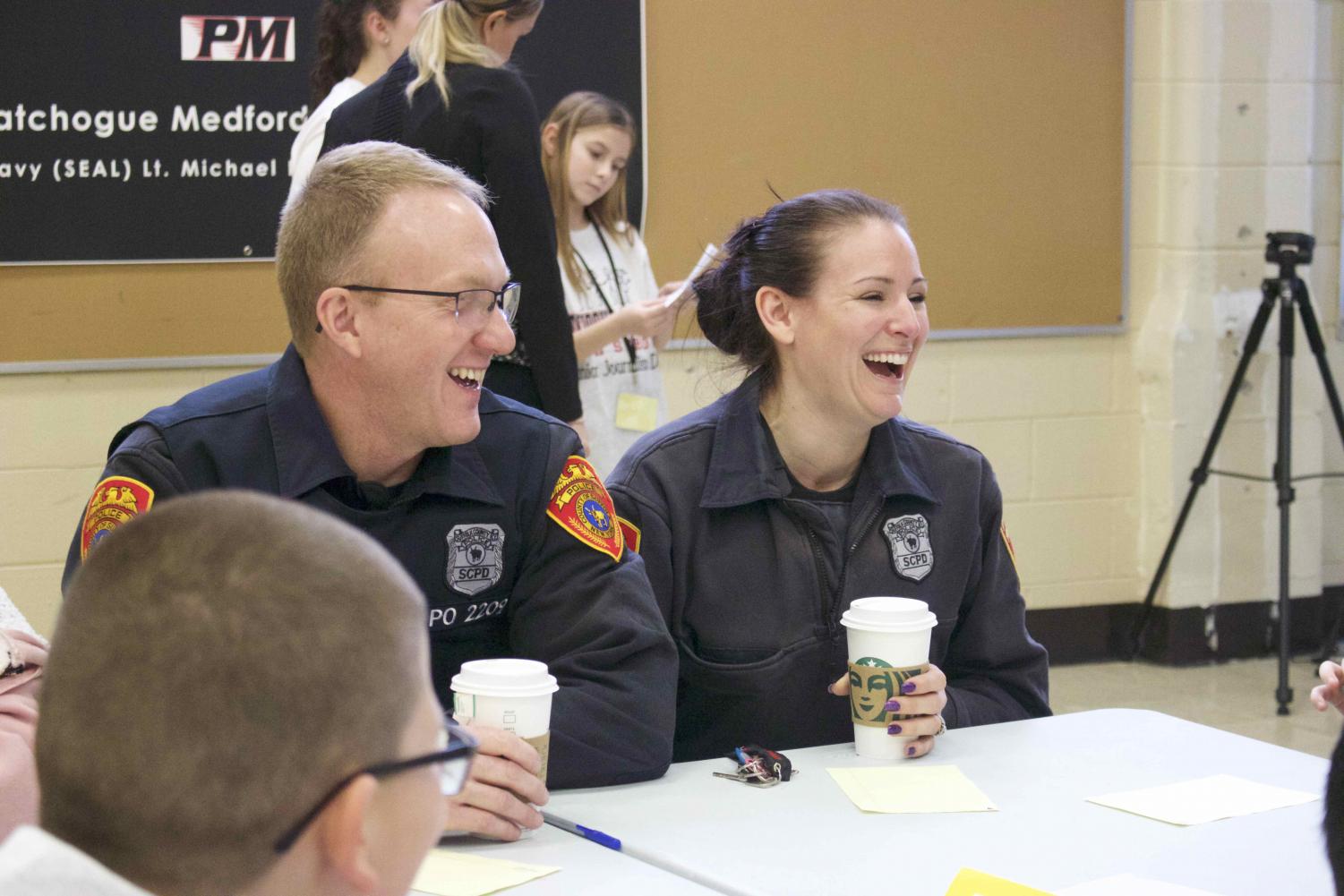 COPE officers Kevin and Brenda sat down with junior journalists from Medford Elementary to talk about what it means to be part of a community. (Photo by Phoebe Lawson)

COPE officers Kevin and Brenda sat down with junior journalists from Medford Elementary to talk about what it means to be part of a community.

Junior Journalism Day 2020 is all about “Community”

Our second annual Junior Journalism Day was a success as students from Eagle, Barton, Bay, and Medford Elementary schools were in attendance. This year, our theme is “Community” and people such as politicians, librarians, businessmen, and police officers were interviewed as influential members of our community. The question of the day was “What does it mean to be a member of your community?” Being nice to others and completing acts of community service were common answers given by the students. The students were all eager to learn and had lists of questions for the community members so they could construct articles about them.

How do elected officials help our community?

Today, we met Rob Calarco who is Suffolk County Legislator. He is a government official in our community who has been helping people for twenty years. His hobby is gardening which he started doing with his father. His favorite vegetable to grow are tomatoes during the summer.

Rob Calarco is working on many different projects in our community. He told us about the Canaan Lake clean-up project. There were bad plants and invasive species growing in it the lake, so they decided to clean it out. The cleaning is going be done by the summer and after that, they plan to turn it into a mini stream. People will be able to canoe, fish, pinic, and kayak once the project is completed.

Also, at Junior Journalism, he told us about how one of his projects helped restore the one-hundred-year-old Carnegie Library in Patchogue. If he had not found a new spot for the library, it would have been knocked down. Since, it is for teens, when we are older we can go there to read, study, and take notes. We think it was a cool idea because he saved a building from being knocked down.

*Editor’s Note: This article is the collective work of the junior journalists from Eagle Elementary school with the assistance of their high school mentor.

Libraries are the Heart of a Community

Students from Medford elementary had the privilege of meeting local librarian Michelle Cayea during the second annual Junior Journalism Day. We learned that librarians are in fact allowed to check books out from their own libraries, an important piece of information for fifth grader Logan Persichilli who mentioned that she hadn’t known that before.

“I hope I get to read books for my job when I get older,” said Lauren Loch, another fifth grader.

Overall, the young visitors were wowed by Cayea’s experience as a librarian. They asked her all of their questions, and were very interested in her responses, “I was interested to hear that she liked farm animals! I had fun talking to her; very fun,” said Maddie Fernandez. The whole day was a great experience for everyone involved.

*Editor’s Note: This article is the collective work of the junior journalists from Medford Elementary school with the assistance of their high school mentor.

How do schools and police work together?

Brenda and Kevin are local police officers that taught us about how they help the community and some personal facts about themselves. The officers main priority is to keep the community safe, for example they stop robberies and drivers over the speed limit. They enforce laws and get alarmed when citizens are no longer following them. In order to be a police officer you must maintain your health.

Kevin and Brenda, COPE officers for the 5th precinct of SCPD, explain how they go to the gym  for an hour everyday to ensure their abilities of being in law enforcement. They also explained the many steps in order to become a police officer. The first stage is physical training which entails a large amount of different exercises.

The second step is the officers get the choice of being tasered or pepper sprayed, this is so they don’t abuse their power. They also have to study the law and take a final test, that determines whether you’re an officer or not. If they pass they get to enforce the law among all citizens and officially become an officer.

Brenda and Kevin stated, “it is an honor to be a part of the community.” They both explained their inspiration for the field.  Kevin was inspired by his Dad and Grandfather because they were both officers. Brenda had always dreamed of being a police officer. They both hope to further their careers in the law enforcement field and genuinely enjoy working so closely with schools in the area.

*Editor’s Note: This article is the collective work of the junior journalists from Medford Elementary school with the assistance of their high school mentor.

We sat down to interview Manny Felouzis, a former teacher and community organizer.

Manny Felouzis had the opportunity to help special ed kids in the tenth grade when his JV coach gave him the chance to play football with blind children.

Mr. Felouzis is now the President of the Patchogue Medford Hall of Fame, and even was awarded the BOCES Teacher of the Year. At BOCES he was a special education teacher and Patchogue-Medford superintendent award winner. His advice to the kids from Bay Elementary school is to participate in our community as much as possible by helping our families with house work and cleaning our community.

He encourages us to go to village board meetings to learn about the changes made to our community. My favorite thing that he said was, “It’s just like karma. If you do something positive, something positive will come back to you in return”.

*Editor’s Note: This article is the collective work of the junior journalists from Bay Elementary school with the assistance of their high school mentor.

Are you trying to save the Earth with eco-friendly produce?

There are several techniques that can be used to improve the environment and limit the damage done to the Earth. One of these techniques is hydroponic agriculture which is used by Cory Mahony, owner of Urban Fields Agriculture in Patchogue.

After we interviewed a local expert of the technique, we learned so much about what hydroponic agriculture is and how it is used to improve our community. This style of agriculture, explained by Mahony, is when plants are grown in water, grafts, and artificial rocks made of fiberglass. This style of farming is very effective in certain cases but, not for plants that are used to desert climates.

As a kid, Cory loved the woods and camping, as well as greenery. He learned about this type of agriculture from an article that he read but, never thought he would become a hydroponic gardener.

Growing up he thought he would work within the stock market on Wall Street. Ever since starting his business, he grew between 6,000 and 8,000 plants and currently has 2,000 plants growing at different stages. His favorite plant to grow is basil because it smells nice and makes a good pesto which is important for many of the local restaurants he sells produce to like Perabell on Main Street in Patchogue.

*Editor’s Note: This article is the collective work of the junior journalists from Barton Elementary school with the assistance of their high school mentor.

The local press have a direct pulse on the community

Glenn Rohrbacker is a journalist from Long Island who graduated from the University of New Haven in 2018. He went to college for music but ended up finding a new passion for journalism instead.

After interviewing him, we learned all of the topics he likes to write about, some include the recent news about the coronavirus, interviews, new businesses and the government. He likes learning about new things in his community and introducing new ideas to people who don’t know about them.

He, along with his classmates, was inspired by his English teacher to always improve upon themselves. The impact from his teacher, Mr. Orenzo, led him to become the Editor in Chief of the Charger Bulletin, had his work published in Editor and Publisher Magazine in the “critical thinking” column and have his work recognized by the Society of Professional Journalists and the NY State Press Association.

Glenn Rohrbacker currently works as the Associate Editor of the Long Island Advance and has published over 600 articles in his career.

One of the most interesting ones being about the environment and climate change. He likes hearing feedback from his readers about how the information he wrote about was helpful to them. For young journalists, he says to take long breaks to refresh your memory if you have writer’s block.

*Editor’s Note: This article is the collective work of the junior journalists from Barton Elementary school with the assistance of their high school mentor.

If you want a picture to show with your comment, go get a gravatar.